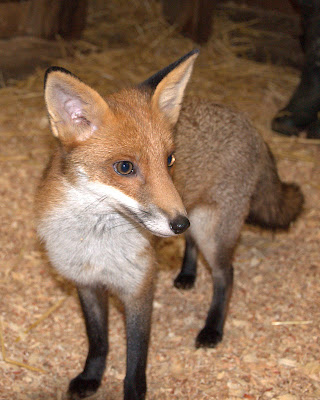 We have recently gained a new fox... pictured above is a young vixen we have named "Flo". She came from a rescue centre which had reared her and then after a couple attempts of releasing her only to find her appear back on their doorstep the following morning decided to re-home her permanently.
We are currently housing her in with our reared cub, Luna, and they have already formed a strong bond and has provided Luna with the much needed "foxy" company.
Later in the week we will introduce Luna and Flo to our main dog fox Frodo and his sister Pickles in the main fox enclosure. Hopefully they will accept each other readily and Frodo will be able to start his own family carrying on the genes of both Buster and Honey.
Posted by British Wildlife Centre at 23:37