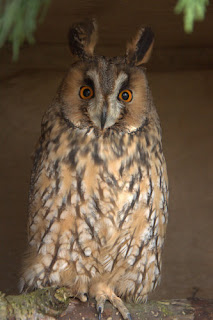 This beautiful owl is one of the least known and shyest of our native owls. Weighing only around 200-400g it is only slightly smaller than the Tawny owl, but has a wingspan to match it of up to 1 metre. These owls have the knack to almost change shape. Usually roosting very tall and elegant with a narrow face they can make them selves appear fluffier and more rounded as pictured above. The colouration really has to be seen to be appreciated and works extremely well as camouflage in its mixed woodland habitat, although I always feel they should be seen in an old pine tree.

There is the general rule with owls eye colour as to when they are most active, but the long-eared owl is almost strictly nocturnal only rarely venturing out in low light as the orange eyes would suggest. They emit a quiet hoot call, "hoo hoo hoo hoo"

Prey is made up mainly of the smaller mammals such as mice and voles, but they do also take smaller birds from their night roosts.

Nesting in abandoned crow or other bird nests or squirrel dreys they usually have one clutch of eggs a year in the Spring. 3 or 4 eggs will be incubated for around 27-30 days before hatching. The chicks grow quickly and will be out of the nest at 21 days and starting to learn to fly at only 30 days old. Still very dependent on the parents though until they are almost 2 months old.

Population counts of this secretive owl are guesses at best with many numbers thrown around mainly at about 2000-4000, although it is generally believed that their numbers are heavily boosted in the Winter due to migrants from northern Europe. 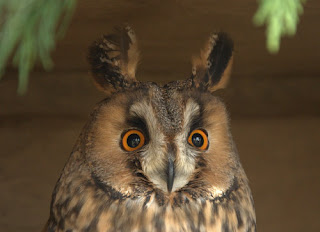 No one really knows the function of the striking prominent ear tufts they have, possibly for communication, but it is generally considered it does not aid hearing in any way. However this owl does have amazing adaptations to enhance its hearing. The facial disc helps to channel the sound into its asymmetrical ears which openings are almost the height of the owls skull. These 3 things together help the long-eared owl to hunt with 100% accuracy even in total darkness.

We currently have "Quil & Embry" in our off-limits site to allow them to settle in while we build them a new aviary down with the rest of our owls. We hope to have them on display for the Summer, if not earlier, and of course we should have our flying long-eared owl chick with us by the end of May being taken out and about by one of our keepers.
Posted by Matt Binstead at 22:54