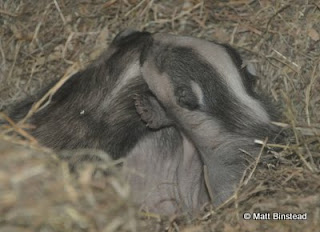 Today while the keepers were cleaning out the badgers they heard some noises coming from the end pod of their sett. After a closer listen they found that "Humbug" has once again had cubs here at the centre.

Following last years late litter of 2 females, "Bubble" & "Squeak", pictured above at 3 weeks, she has produced a litter of at least two this year. Could not see any of them but there were at least two sets of noises coming from the litter.

These 2 will be left to be reared by Humbug before removing from the group at the end of the year, they will then be paired up with our 2 female cubs we are rearing and released onto our wild sett as a tame group to use for badger watch evenings.
Posted by Matt Binstead at 23:47