Cats and Rabbits on the move. 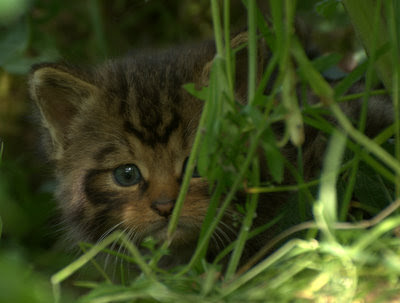 Continuing with our shuffling of animals, our wildcat kittens will be taken off display tomorrow and housed in an off-display enclosure until they are to be re-homed. The male will be going to another Centre later this year, and as some of you are already aware, the young female will be kept at the Centre and put back out on display with Dougal after Una has retired. It will not be long until the breeding season is under way, and we hope to have more kittens later this year to help the captive breeding programme.

Today we finished tidying up our rabbit enclosure. The outside area for the rabbits has had a bit of a spring clean, and now looks much better than before. A new batch of young rabbits, including a very friendly one called Sammy, are now its inhabitants. These will be soon be housed in only the warren and outside parts of their enclosure, thus allowing us to extend the hedgehogs into the current inside rabbit pen via a small bridge which will link the two pens.
Posted by British Wildlife Centre at 16:02