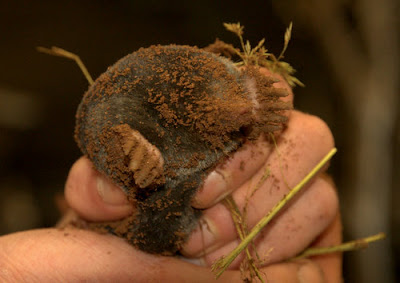 Today saw the arrival of a new mole to the BWC. It has been a while since we had a mole on display, our last one dying of old age, but when he was there he proved to be one of the most popular animals even coming out to hand feed. Lets hope our new mole, Matty, follows suit.

Moles are thought to be one of the six most common UK mammals but they are very rarely seen. Normally their only give-away is the molehills they leave in their path. They are very well adapted to living under ground, tiny ears and eyes and huge shovel like forehands to help them to dig. Their fur can lie either way making it easier to traverse their tunnels backwards and forwards.
They will prey on most invertebrates with earthworms being a staple diet. They have been known to bite the heads off of worms and store them in a "larder" if food is aplenty.

Make sure you stop by next time you are here to see if you can see our mole.
Posted by Matt Binstead at 17:56