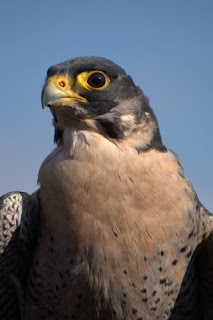 Recently joining our team of raptors is "Jack" a Peregrine Falcon. He is currently on loan to the Centre until we acquire our own Peregrine later in the Summer. I am currently training him to fly with the help of an experienced falconer and hope to have him flying over the Centre within a few weeks. In the mean time look out for him around the grounds while he is getting used to being out and about on the glove in front of the public.
Peregrines are the fastest record animal reaching speeds of over 150mph in its stoop. In fact the tiecel (male), which is the faster of the two, has been claimed to of reached 224mph in its display dive!
However it is still possible that a faster animal is out there, and although not a true native species it is a regular non-breeding visitor to Britain.... the Gyrfalcon.
The gyrfalcon is the fastest falcon in level flight and is believed by many to be the fastest in a stoop due to it being the largest and heaviest of the falcon family. Currently the peregrine still holds the record though, as all high speed tests have so far only been done on these.
Posted by British Wildlife Centre at 19:59