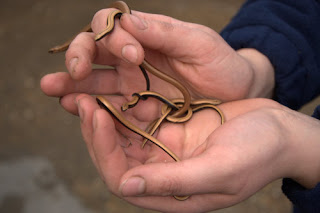 A couple of summers ago our Weltalands Nature Reserve was selected as a relocation site for reptiles, including slow worms. Over the Summer of 2008 over 100 of these legless lizards were refered to us for re-homing on our reserve. They seem to be doing well, and occasionally over the end of last Summer we saw one or two out basking in the sun.
Today a few more were bought to us to be released so keep your eyes open for these, and the slightly larger older ones, around our boardwalk next time you are here.
As a side note...
Jack the Peregrine took his first flight today, 2m to the lure, may not sound much but is a great start.
Foxes Frodo and Flo were found tied two mornings ago, and Lex and Kendra have been mating for the last few days. Watch out for FOx cubs and Wildcat kittens later in the year!

Posted by British Wildlife Centre at 22:04