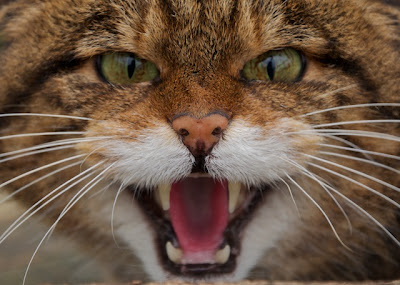 The next time you visit the BWC you will notice that we have had a light shift around with our wildcats. Our new enclosure opposite the main wildcat pens is being used as a spare wildcat pen for the Spring. This has allowed us to separate all our cats for the breeding season.

Yes, I know what you are thinking... this means we will not be breeding from our cats this year. We have been thinking about this a lot over the past couple of months, but made the decision a little while ago not to breed any wildcat kittens this year.

The reasoning for this is two fold. Firstly, a lot of the cats we do have here are related in some way, therefore limiting our matching options for this year. Secondly, new research is underway to determine the purity of all captive wildcats in the UK. Hopefully this will be well underway come the Summer, and then we will be able to acquire a new breeding cat at the end of this year to pair up with one of our pure cats for breeding in 2013. The situation at the moment is that many Centres are being asked to keep hold of any kittens they produce, and with limited space the decision was made to forgo the season this year to breed and hold purer cats the following year. 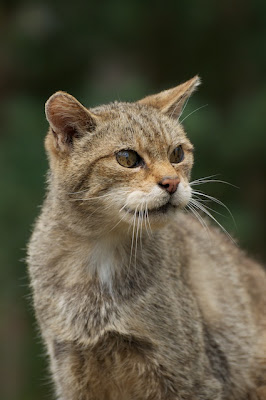 So where are all our cats now? Well, Una above has been moved off display... she is a very elderly cat now, and some of you may have noticed that she had a slow recovering ulcer in her left eye. She is still full of form, but looks a bit ragged. She has a nice large pen off display to retire in .

Dougal, who only ever seems to like pairing up with Una, has been moved off display too. He seemed to sulk a little with her absence and so it made sense.

Fergus has been moved into the first enclosure. He is a lovely looking tom cat, and we are working hard with him to try and establish him as our main educating cat. He is slowly getting more used to us being in with him, and the public viewing him, and I am sure it will not be long until he is as visible as the others.

Iona has been moved from the third pen, and placed into the new enclosure opposite the main ones.

This leave Kendra in the middle pen and Richy Junior in the third pen. 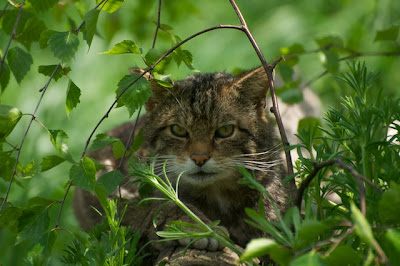 I know the lack of kittens this year will disappoint many, but you have to look at the long term prospect for wildcats in the UK. We are working closely with the breeding co-ordinator at Port-Lympne Zoo and Scottish Wildcat Association to try and help save our last remaining native cat in the UK. By missing out this one season it will mean far less, non-suitable cats, will be in captivity and our success in breeding wildcats can be utilised in the future to breed far purer cats, aiding the bloodlines in captivity and with a strong chance of being involved with the releases back to the wild in the future. 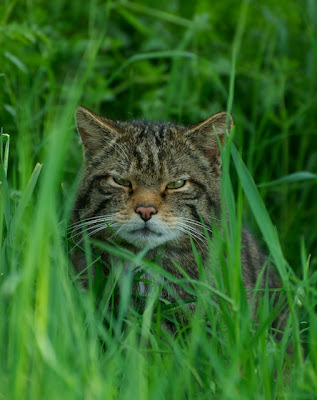 With only 400 left in the wild, the Scottish wildcat, or Highland Tiger as it has become locally known, needs all the help we can give it. It is our duty therefore to do the best we can by working closely with other groups and breeders to ensure this happens.

Take a look at the Scottish Wildcat Associations website to find out more about the work they do, and the Wildcat Haven project that may be the way to save wild wildcats in the UK.
Posted by Matt Binstead at 14:24