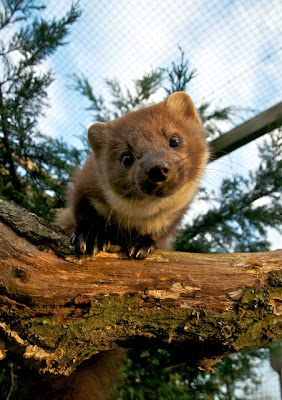 Bonnie (below) and Clyde (above) have once again mated this year, and it was a much rougher affair than in the past. Previously over the last couple of years we have seen and heard the pair mate, but this is the first year where Bonnie has shown the tell tale signs around her neck of slight scarring/redness from the long mating procedure.

As with most mustelids, the mating can look quite aggressive, but it is believed that this aggression with the female is what stimulates her into oestrus and therefore allow her to become pregnant. We will leave the pair together until the end of August in the event of subsequent matings, and then it will be all fingers crossed again for the possible litter of pine marten kits in Spring next year, only this time we are even more hopeful than in previous years. 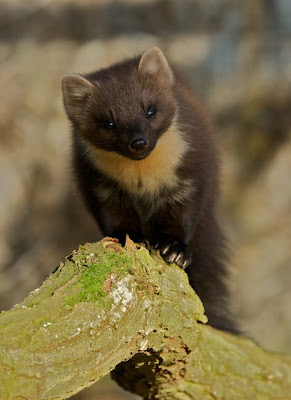 Over the last few years, and even as recent as February, the pine martin has been brought up in the news as the Scottish Gamekeepers Association has apparently called for a cull on these animals. It seems strange that one of our most iconic, and rarest animals could even be considered for a cull, but the SGA are concerned about the effects they are having on our Capercaille and new areas they are finding for nesting.
I have been asked about this a lot, but am refraining from passing on my opinion until I know and have heard more about it. Even the Mammal Society have yet to offer their position statement about this.
In the past the Vincent Wildlife Trust has looked into the possible release of pine martens back in to England so maybe a relocation exercise could be a possibility to aid with this whilst thinning numbers in these high density areas.