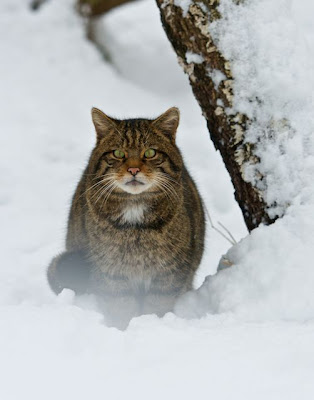 After the success of the "Badger Facts" post, I thought I would start off any conservation posts with a profile on each species, just to get across how great our British wildlife is before we look at the work going on to try and conserve it.

So where better to start than with one of our rarest mammals, and keeper Richard's favourite, the Scottish Wildcat!

- Evolved from the European wildcat, they have now been separated long enough on our island to be considered by many to be a separate sub-species of cat... The Scottish wildcat.

- The largest evidence of a wildcat showed it to be 4 feet in length from head to tail, which would have weighed about 14kg

- Wildcats have evolved to have exceptional eyesight, even their night sight is believed to be 7 times better than ours

- Arguably their keenest sense is their hearing. They can independently rotate their ears through 180 degrees, and their hearing sense is active 24 hours a day

- In other words, they can hear in their sleep... how cool is that!

- Wildcats can accelerate up to a speed of about 30mph

- Wildcats are believed to be one of the only un-tamable wild animals, even if taken as a young kitten they can not be reared to be "pet" tame

- Weight for weight, the Scottish wildcat is the most aggressive cat in the world! 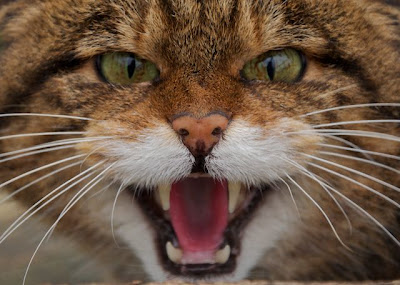 So how do they differ from domestic cats? It is true, that to many they will look like average tabby cats, but take a closer look and hopefully you will begin to see and appreciate that there are differences there... subtle in many cases, but still there.

Wildcats are generally larger than your average domestic cat with males weighing up to 10kg, and have longer legs in proportion to their bodies. A stockier, more muscly build with defined markings on the body. A flatter, wider face with slightly smaller rounder ears and an in-explainable difference with the eyes... look into a wildcats eyes and they don't look back, they just stare at you in an almost hypnotic way. Internally they have a larger skull and jaw bone differences and a shorter gut.

Perhaps their most obvious difference visually however is their tail, being shorter, bushier and with characteristic black rings around it and ending in a blunt end rather than tapering to a point. 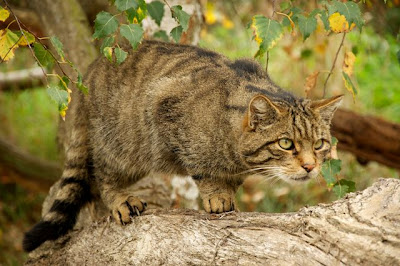 To learn more about Scottish wildcats, why not come and see ours at the Centre and listen to one of our keeper talks on the "Highland Tiger."

Check back in a few days to read about the conservation plans for the wildcat, and how the BWC is playing it's part to try and save Britain's last remaining native cat!