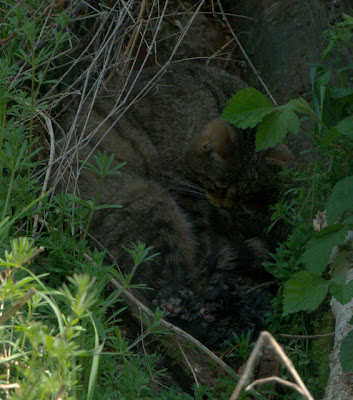 Yesterday saw Iona give birth to her litter of kittens during the day. She took up the same place as last year in her enclosure, and over a couple of hours around midday gave birth to what I believe is 4, yes 4! kittens.

This is a large litter for a wildcat, and after last year failing to look after just the one, we all hope she has learn't and will be better prepared for this year. So far she is doing a grand job.

I only had the small lens on my camera, so it is a very grainy picture, but you can still make out the face of one of the kittens. For some far better efforts check out our flickr page (linked on the right) for some much better photos of the proud new mum and her babies.

I spent the early part of the afternoon watching her through binoculars, and I think I could make out 4 distinct kittens. I watched her eat the umbilical cords and clean them all up before settling down for a well earned rest. All four kittens tucked in very quickly for their first meal.
Posted by Matt Binstead at 11:16