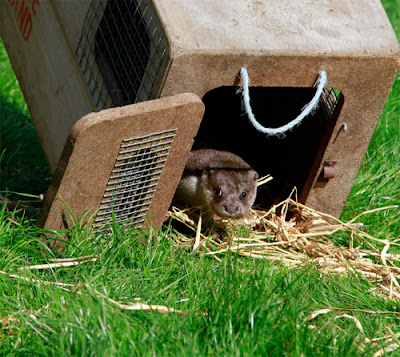 On Sunday, we introduced a new otter to our collection. Above is a photo of "Grace" who came to us from the New Forest Wildlife Park, in the New Forest. Originally Grace was a wild orphan cub, but after being rehabilitated by the NFWP they were unable to get the cooperation from local landowners to allow her to be released back where she came from. Having been in captivity now for nearly 3 years, it is believed she is told old to be returned and so needed a permanent new home.

With Stirling having recently lost his mate, we thought we could offer here that home. The hope is he will pair  up nicely with Stirling in the future and possibly even mate to produce more otter cubs. As you can see from Ian Rentoul's photographs above, she was shy at first to enter her new enclosure, but was soon rushing out to explore. If you come to the Centre she is now in our third otter pen, but is still very shy so you will have to be patient to get a glimpse of her while she settles in.

Thanks to Ian for his photographs of her release. To see more of Ian's photos check out his flickr page linked.
Posted by Matt Binstead at 13:16