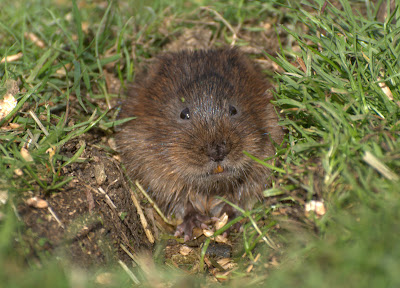 The Water Vole is one of Britain's most endearing small mammals. It is Britain's largest vole and probably most famous for being Kenneth Grahame's "Ratty" in The Wind in the Willows.

Still often confused with a rat, the water vole is a similar size but has a blunter, rounder muzzle, a shorter tail, softer shaggier fur and a straighter back.

The water vole is mainly found in areas where water is present all year round, densely vegetated banks with slow flowing rivers or lakes are ideal. Their diet consists mainly of these different grasses and other vegetation found along the river banks although occasionally they will also eat berries and invertebrates too. During a day they would have to eat 80% of their body weight in food.

They den in burrows along the waters edge, consisting of many different tunnels with not only entrances above the waters surface but also below allowing them to swim into their homes. The tunnels can stretch a fair distance, and often you will find straighter tunnels in some areas to help reduce the risk of flooding.

They tend to breed over the Summer months in the wild, and can have up to 5 litters a year producing up to 9 pups in a litter. These will disperse soon after reaching maturity, with only the last litter sometimes staying behind over winter with the parents. Bickering tends to be displayed with chattering teeth and even rearing up on their hind legs and boxing with their forefeet. 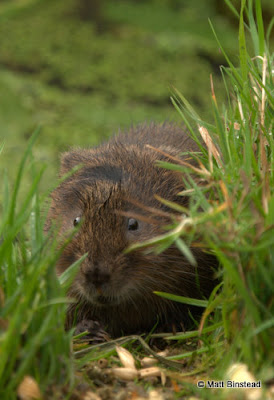 Check out these water vole facts...

- On mainland Europe, water voles are often found living more inland and are considered a pest by many people

- In this country they are normally found within 20 metres of a water source, and are extremely popular

- They mark there territory by rubbing their hind feet along glands on their flanks, before stamping their feet in to the ground. During the breeding season females do this on top of their droppings leaving flattened dropping as a good sign of females present

- The water vole is a strong swimmer, and can easily swim up to 500 metres along the surface

- They can happily dive to over 15 metres in depth

- If pursued by a predator, they will kick up the mud to create a mud cloud to confuse and disorientate the hunter... just like a smokescreen. How cool is that!
Posted by Matt Binstead at 13:04