Rearing red squirrel kittens is one of the things I hope every year I don't have to do... but at the same time, look forward to if I do have to step in and lend a helping hand.

A couple of weeks ago now, a young female kitten was spotted in one of our breeding pens out of her nest box a little earlier than she should be. I left her in there, hoping that mum would come and collect her, but checking a little later and she was still out and trying to eat some of the seeds.

I left her again to give mum a chance... but on checking back nearer midnight, mum was asleep, and the kitten was curled up and trying to keep warm on one of the shelves. It is possible she wouldn't of survived the night, and so I took her in to warm her up and look after her. 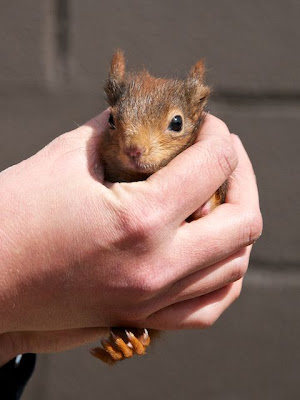 She was at that awkward age... too young to look after herself, but old enough to know that I wasn't her mum... surprisingly however she took to the goats milk extremely quickly! That was as far as it went though.

You may remember in the past, the squirrels I have reared are very friendly and latched on to me at all times... not this one! She is a right character, and once she has taken her milk she wants nothing to do with me at all!

On the plus side, she seems to be thriving, and is taking milk for herself now from a bowl and weaning well on to solid food. She should be a great member of the copse for the summer. 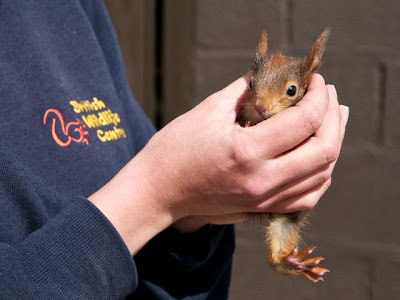 I have named her "Cinder". You may remember one of my favourite girls a couple of years back called "Flame", because of her red and white tail? Well Cinder has a black and red tail as if it has burnt out... also, it could be short for Cinderella... the forgotten sister... It works on two levels. I like that!
Posted by Matt Binstead at 11:50