Today is National Badger Day! And you know how I remember?.. As it is the same day as my Nan's birthday. So happy birthday Nyna, I'll give you a call later :-) 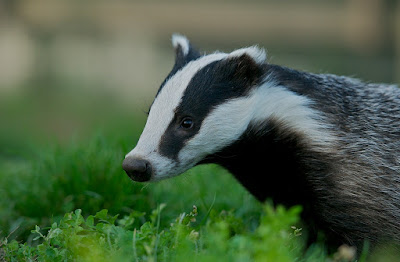 So badgers... what is there to talk about badgers at the moment? Hmm, not much... certainly nothing controversial and emotive any way so I will just leave you with a few badger facts below.


- Badgers are a member of the weasel family, or "Mustelid" family. Closely related to weasels, stoats, mink, polecats, pine martens and otters, badgers are the largest mustelid in Britain

- A male badger is called a boar, a female a sow and the young are called cubs

- Badgers can mate at anytime of year, but have a delayed implantation meaning that there cubs are always born during the start of the new year and usually around February time

- A group of badgers is called a "clan"

- Living quite solitary in Europe, badgers are one of Britain's most social mammals

- There are 8 species of badger in the world, only the European badger lives in Britain

- It is thought that the word "badger" comes from the French, "Becheur" meaning "digger"

- The Welsh for badger is "Moch daear", meaning "Earth pig"

- Badgers are very clean animals, always clearing out their setts, and always defecating in special "latrines" dotted around their homes

- Most of a badgers diet is made up of earth worms, of which they can consume around 200 of in a good night


Why not come and see our badgers this weekend. It will not be long now till they start slowing down for the winter, and although they don't hibernate, they will be a lot less active and less likely to be seen outside their sett during these colder months. Of course, you will still be able to see our badgers in their sett though through the winter.
Posted by Matt Binstead at 11:22