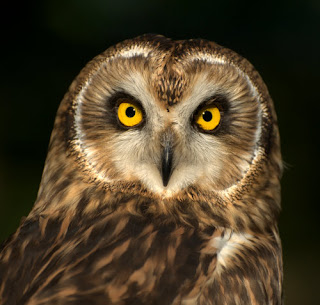 Introducing our new Short-Eared Owl, Asio flammeus. We have yet to name it so any suggestions welcome.

I have literally got back in from collecting our new owl, and really am so excited about this one that I had to post a blog post immediately to share it with you all... I'm even missing Dr Who for this so you better all appreciate it! 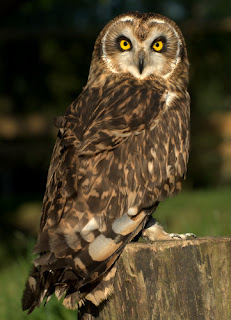 She is probably too old to get to fly, only a year old, but you really need to imprint them from less than 3 weeks. But she seems quite happy on the glove, so you will see her out and about the Centre and on photographic days. Of course in-between all this she will be housed in her aviary next to the long-eared owls. 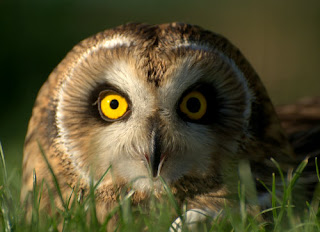 To me they are the most beautiful of all the British owls. I don't really know what it is about them, but I think they are truly stunning!

Short-eared owls differ from our other British owls by preferring  more open areas of habitat such as moorlands and marshes. They hunt predominately on small mammals such as voles by flying not often more than 10ft above the ground, occasionally hovering, but normally alternating between flapping and gliding.

They main sense is there hearing, as with most owls, and although very difficult to see they do actually have little ear-tufts... hence their name... but these are believed to have nothing to do with the hearing, instead being a way to communicate. 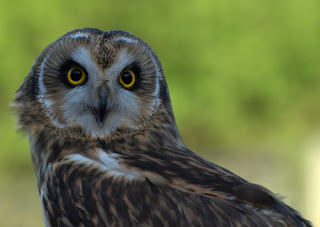 To look at they are the same size as a long-eared owl or a small tawny, but the colouration is more contrasty and they have the stunning yellow eyes of an owl happy to hunt while there is still a bit of light in the day.

She is gorgeous, and I look forward to introducing her to you around the Centre when you next visit on one of our open days.
Posted by Matt Binstead at 19:24