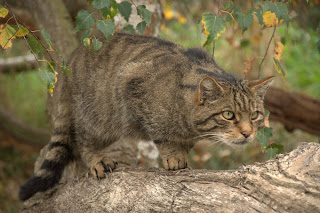 Last week we had our first litter of Wildcats born here for 5 years. "Kendra" gave birth to a litter sired by "Lex" (pictured above), although we have not seen the kittens we have heard their noise from outside the den site. Hopeful for more, "Iona" (Kendra's sister), has not been seen out and about for a couple of days and so we are hopefull that she has given birth to her expected litter too.

Wildcats are our last remaining native cat species in the UK, and are on a rapid decline with only an estimated 400 pure individuals left in the UK, and all confined to the remoter parts of Scotland.

Looking very similar to domestic tabby cats, there are in fact many subtle differences. They are larger and bulkier than the average pet cat, have longer legs, a broader flatter face with smaller rounder ears, a distinct "M" marking on the forehead and a dorsal stripe which runs along the spine. However their most distinguishing feature is their slightly shorter, but much bushier tail with between 3 and 5 distinct black ring markings and a blunt end.

Of course as well as the physical differences, there are behavioural ones too... Wildcats are believed to be the only wild animal which can not be 'tamed' by man and weight for weight the Scottish wildcat is the most aggressive cat speices in the world!

When our kittens have matured and reached about 6 months old, we will release them back into the wild to help conservation efforts in Scotland.

Be sure to check back for updates on our kittens as and when they emerge from the den site.

We do not usually name any animals we intend to release, however the 1st male cat from Kendra will be called "Richy-junior" after one of our former keepers who had a very keen interest in this species.

Posted by British Wildlife Centre at 13:36