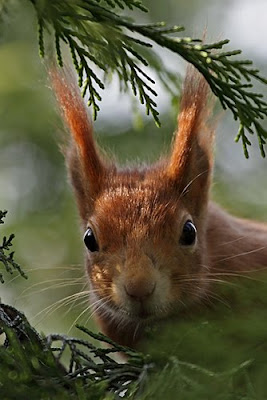 Many congratulations to Mark Coventry for winning the BWC Spring Photo Competition with his image of a Red Squirrel shown above.

After looking through the over 100 entries, the keepers whittled them down to a short list of about 15 which they particularly liked for various reasons. Then on Wednesday evening, wildlife photographer Andy Rouse came to the centre to photograph our fox cubs. While here I asked if he would mind judging the competition from the short list and he was delighted to help.

Out of the photos there were a few that caught his eye, and the Wildcat in the post below was a close second, but in the end Andy plumped for Mark's photograph of the Red Squirrel above.

Andy Rouse felt that the image showed the cute factor of the red squirrel, was nicely composed and in-focus and remarked how tricky it was to get a good sharp photo of such a quick moving animal. He particularly liked this image as he has still yet to see and get a good photo of one of our red squirrels out in their new walk-through red squirrel enclosure.

Many thanks to Andy for his help with this competition, and congratulations again to Mark Coventry for his superb portrait shot. Have a closer look at his image next time you are at the centre on our news board, or follow the link below to see some of his other photos on his website.