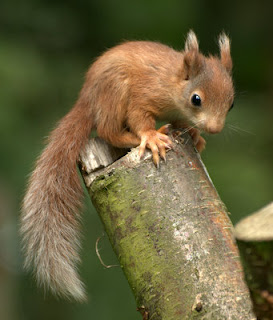 A week ago today I set to the task of seeing what red squirrel kittens we had bred so far this year at the Centre. The plan was to hopefully release a few of them into our walk-through red squirrel enclosure.

After looking through all the pens I now know we have had our most successful year to date breeding these iconic British mammals. We have many litters varying in age from a few days old all the way up to thirteen weeks and ready for separating from the mother.

I took 8 squirrels that were ready to be re-located and placed them in the holding pen in the walk-through enclosure, then let them go on the following Monday in front of a film crew that will showcase our efforts, in breeding and conserving these animals, across the world.

They have settled down well and are now even more noticeable at our keeper talks as I put in a few "friendly" ones too. 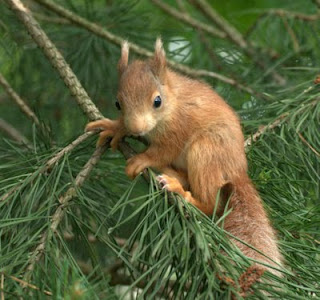 While searching I came across one youngster, only 5/6 weeks old, that looked like it had been abandoned. I don't like taking young away from the mother so checked the nest boxes first, and found 4 of her brothers and sisters all alert and active in the drey. This youngster had definitely been kicked out by the mum and was listless, lifeless, damp, had her eyes half closed and I though she probably wouldn't make the night.

Having reared many squirrels in the past, I took her away to try and bring her round. She made the first night and is now going from strength to strength. A week older and I am now beginning to wean her. When she is old enough I will pair her up with another one of our friendly squirrels, Rupert, where they will hopefully breed next year. She will not go in the walk-through as she will probably just be a nuisance jumping on people and possibly following them through the double doors. 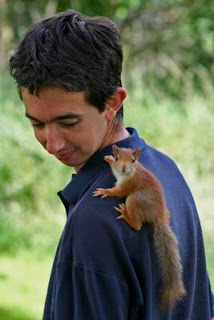 Look out for her next time you are here, she may well be on my back as I wander round like the 4 I reared a couple of years back, including the one above... Nutkin.

Updates on Wildcat kittens and Leverets to come next week.

Hope to see you soon.
Posted by Matt Binstead at 18:12