Is a cull on European Eagle Owls in the UK imminent? 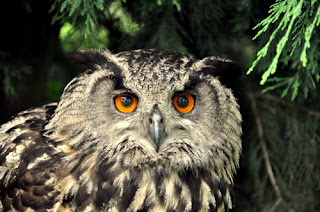 There was a sudden uproar over the web this week with the leak of a possible cull of European Eagle Owls in the UK. It seems like DEFRA will be making a decision based on a health and safety report being carried out by FERA. It also seems like they have been trying to keep it on the quiet side, and with some investigating by several concerned owl supporters it looks like FERA have only consulted parties which would be in favor of a reduction of eagle owl numbers... maybe why it was all being done on the quiet side?

With the leak several owl experts and enthusiasts have been in contact with DEFRA, and everyone is awaiting the final verdict. It was suggested a decision was to be made by the end of this week, but with the leak and sudden concern over the internet I believe the decision may well be delayed.

Follow this link to find out all the details and keep up with the news first hand.

- There has been a record number of hen harriers at Bowland Forest, which is also home to 2 eagle owl pairs

- Eagle owl diet is mainly made up of rabbits, which do far more damage to the countryside than eagle owls

- Although many of these owls may well have been from a captive origin, a large number have now been bred in the UK and it is not impossible that some may have migrated over from mainland Europe

- After persecuting them to extinction before, are we really going to make the same mistake twice?


It seems the people against the Eagle Owl in the UK is due to its skills and expertise as a hunter/predator. What we must all remember though is that this is a natural way of life, even if the potential prey is something we like.

After being on the fence for some time, the RSPB made an announcement over the last couple of days saying they do not support a cull of Eagle Owls.

Only time will tell and it is in the hands of one man at DEFRA who will make the decision. Lets just hope he looks at all the facts based on actual scientific evidence, and listens not only to FERAs biased health and safety report but also those people who have worked closely with wild eagle owls over the last several years and their supporting groups.
Posted by British Wildlife Centre at 21:00