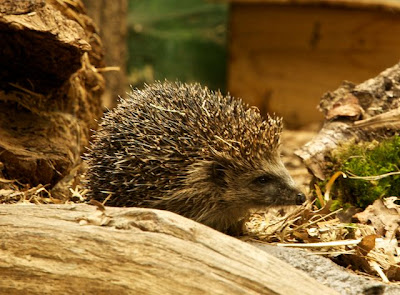 A little while back now I mentioned about two young hogletts that had been found abandoned in a water drain, after being washed away in the floods we had at the beginning of the Summer.

After some careful looking after by foster mum Leonie, Jacky and Steve.... uh, I mean "Timon" and "Pumbaa" are doing extremely well. Not only have they grown up to be healthy hedgehogs, but they are also often seen out for a spell in both the morning and afternoon.

Therefore we have decided to put these two youngsters on display in our Hedgerow section, moving our older resident pair off display to retire in peace and quiet. 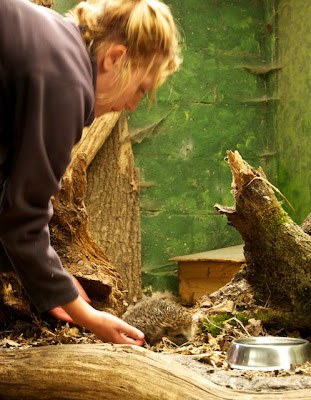 Keeper Leonie has done a brilliant job in rearing these two hogletts from only a few weeks old... does this make Kevin their older brother? Or is that just too weird!

Timon and Pumbaa will make great exhibits, and will take on the mantle of being our educational hedgehogs for school and college visits. Their first school will be this coming Monday where I am sure they will excel, having already been great at keeper talks and photography groups.


More new arrivals to be placed on display next week, so keep an eye on the blog for their introductions, as well as plans for new exhibits to be announced over the Winter. Oh, and of course, the BWC photographic competition which is still open for another 2 months... so get your photos in while you can!