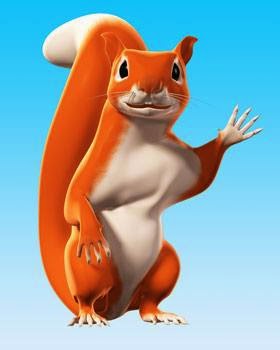 This is "Pip the Squirrel" created by David Mills, owner of the British Wildlife Centre. So who better to introduce you to Pip than the man himself, let me hand you over to David...

"The reason I created the Centre initially was to show visitors some  of the wildlife which lives all around us, that is seldom seen and little is known about, with the hope that they might want to help save it for future generations - 'Conservation through Education"

In order to appeal to very young children and inspire them to 'Connect with Nature', we have taken that concept a stage further. I have now created and developed with the help of a small dedicated team of professional wildlife film makers a cartoon red squirrel character - 'Pip the Squirrel' - who interacts with the animals living at the Centre.

We are hoping to produce a whole series of DVDs featuring Pip and our animals all filmed here at the Centre. The first DVD is now available (see Pips website - www.pipthesquirrel.co.uk) and the second one is in production and will be out in the spring.

I know that we have entered a very crowded market place for this age group of children, but I am confident we have something which is both appealing and educational to young people and their parents alike!" - David Mills, BWC Owner and Creator of Pip the Squirrel

Watch the trailer above for an idea of what Pip is all about, and then have a peek at the video below for more of a teaser... the clip below features one of our keepers Izzy... Hello Izzy!

To see more clips of Pip, and the animals from around the Centre, head over to Pip the Squirrels youtube channel... he even has a Facebook page to keep up with and of course his website to learn more about the series, how it was created and to order a copy of series one.

Thanks to David for his guest post today, and enjoy watching the clips... Toodlepip!
Posted by Matt Binstead at 10:47