Introducing the Roe fawn to Willow 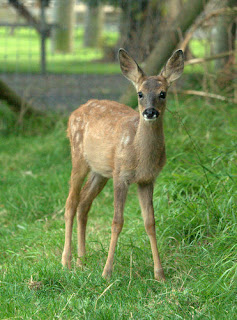 New Roe fawn, as yet unamed, is settling in extremely well. Now is the time to start weaning him off of the goats milk, and get him onto the coarse ration and browse. Today we let him and his fallow friend, who I have since found out is another buck, not a doe as we were told when given to us, through to the main enclosure to mingle with the other deer.
They soon relaxed and enjoyed stretching their legs for a good run, before sniffing the other deer and becoming comfortable with them. The muntjac didn't even seem to notice them, but Willow and Chestnut were soon coming over to say hello. 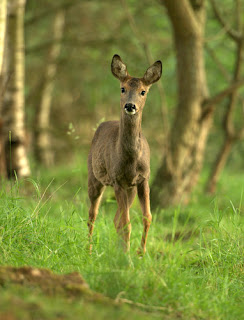 We are hoping that the will get on very well, and that our new Roe buck will mate with both Willow and Chestnut for some fawns in 2013. The new buck will be mature enough in his first season next year, but due to Roe Deer having a "true" delayed implantation, no new fawns will be born here till at the earliest 2013.
Posted by Matt Binstead at 19:51