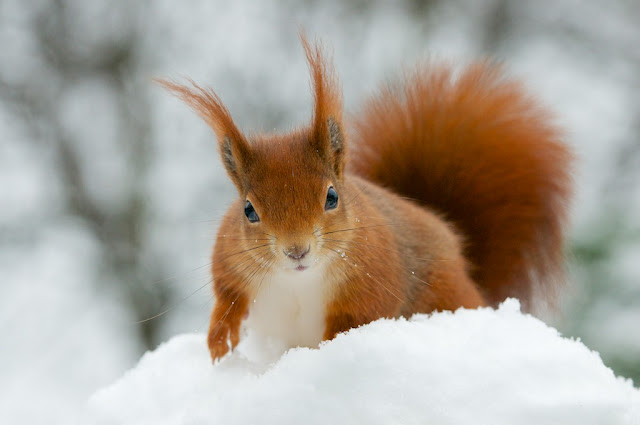 Wishing you all a very Merry Christmas, and all the best for 2017!

Don't forget we are open to the public next week from Tuesday the 27th - Monday the 2nd. So if you fancy walking of your Christmas dinner, or just escaping the family for a while, why not come and see us. No guarantees of course, but you may even get to see our little otter cubs... they made their first appearance the other day with mother Emmy moving them from one holt to another.

Some exciting news to share with you all, as we enter this festive season. We have been keeping this one a little quiet, but have dropped a couple of hints in recent weeks... We have two otter cubs born in our main otter enclosure!

These two new cubs were born during the October half term week, and once confirmed we left them to it with mum "Emmy" to look after. A week a go though they were due a health check, just to make sure they were both OK, so our vet Alan Jones came in to help and at the same time we micro chipped them, and sexed them as one male and one female.

They are now about 7 weeks old, and so it won't be long until they start emerging from their holt for the first few times. If I were to guess, I would say we would see them out at some point next week... possibly even the end of this week... but their timing could not be better, as I hope for a lot of sightings the week after Christmas when we are open to the public. 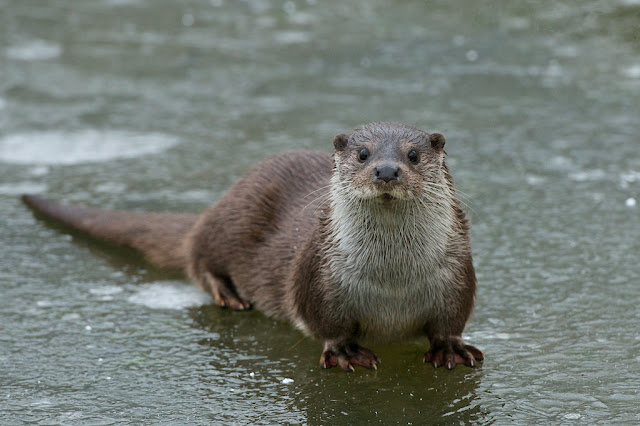 Here is mum, Emmy, on the ice. She is an experienced mum having reared many cubs before, so these two new little ones are in good hands/paws. Emmy is already making sure Elwood, the dad, is keeping his distant, despite him being no trouble at all! 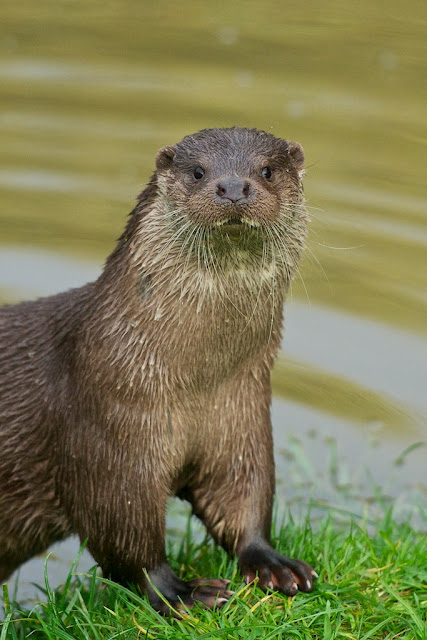 Here is Elwood. In the wild, the male would usually have no part in the upbringing or rearing of the cubs at all, but in previous years here Elwood really has been a modern otter father. Elwood has in the past taken food back to the holt for Emmy and the cubs, and even helped with the swimming lessons. Perhaps best of all to see though is when the cubs are a little bit older, and Elwood seems to have great pleasure in playing with them in the water.

We will update you with news as they start to be seen out of their holts.
Posted by Matt Binstead at 10:11 2 comments:


There was clear favourite animal throughout november in terms of photography, our red squirrels! I am not surprised... they are active this time of year, and they look their best with their iconic ear tufts and beautiful full winter coats. But despite the abundance of great red squirrel photographs being shared, I decided to pick this one above taken by Steve Liptrot.

This photograph, taken by Steve, shows an animal hard at work. One of our otters, Emmy, busying away gathering new bedding material for a fresh new nest. Steve has done a brilliant job in capturing her running straight towards the camera, and the huge mouth fall of reeds and grasses adds a lovely element of humour. This photo shows how our enclosures are so naturally set up for the animals, that wild behaviour such as this can and does happen. Great work Steve.

Steve's photo will be in our gallery next year, and you can see more of his photos by following the link in his name. Including this great shot of "Ted", one of our new foxes to the Centre.

And I just had to share this trio of photos with you. OK, some of the more eagle eyed ones of you may notice these weren't taken here during the last month, but then I never said they had to be... and they were only shared this last month.

Martin took these wonderful photos of Hugo the hedgehog whilst here on one of our photo days. I particularly love the wide angle portrait above. Again, link in the name above will take you to see more of Martin's photos. 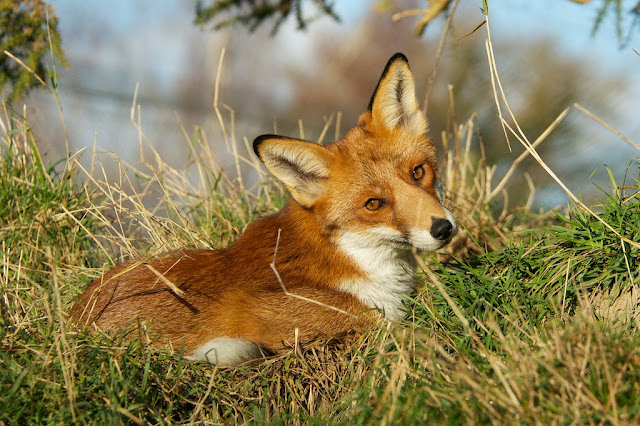 We have welcomed a few new arrivals at the Centre recently. Most noticeably, as many of you regular visitors have already seen, are a couple of new foxes called "Basil" and "Ted". These two foxes were rescued and hand reared at Riverside Animal Rescue Centre. Having become too attached to humans they needed a permanent home to go to, and so this is where we stepped into help.

We have kept it a little quiet, as introducing new animals to an established group can sometimes be a bit tricky, but in the case of these two it seems we had nothing to worry about. After a lengthy introduction process, they all seem to be getting on well. In fact Basil, pictured above, and Ted are already regulars for the keeper talk... and as you can see from above, like posing for the camera. 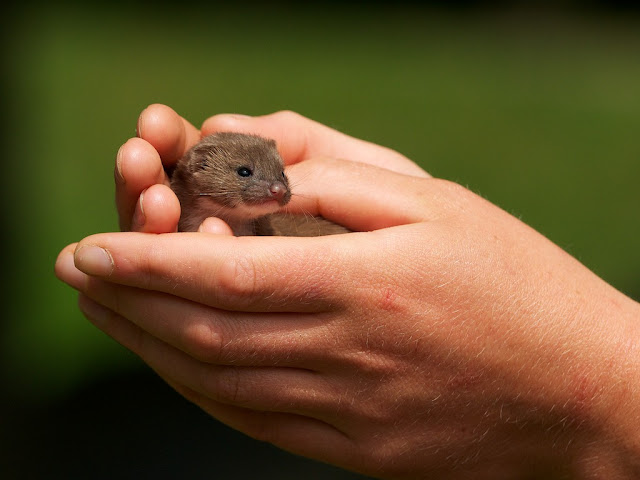 As well as two new foxes, a couple of months a go a rescued weasel arrived on our doorstep. This little female was on deaths door, and we did not expect her to make it through the first night. But keeper Izzy took her under her wing, and with regular nightly feeds for the first few nights and a lot of TLC managed to nurse her back to full health.

With the attention this little weasel needed to survive, she has become quite attached to Izzy, and so release was not an option. So now "Nina" as we have named her, lives in our hedgerow enclosure for you to meet. She is most active in the later afternoon if you want to try and get a glimpse of her. 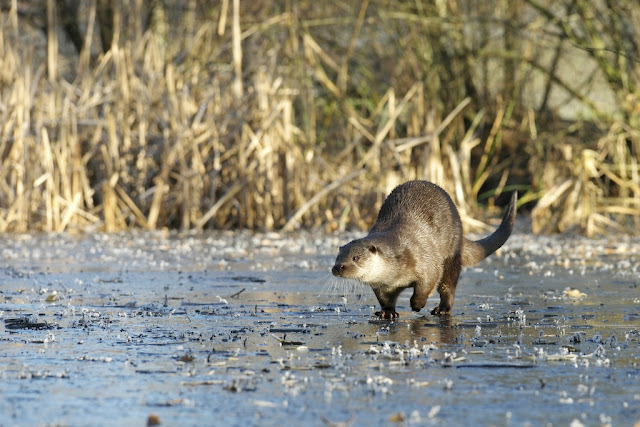 Some more exciting news to announce in a week or so, but until then have a look at a few photos of our otters on the ice these past few days! 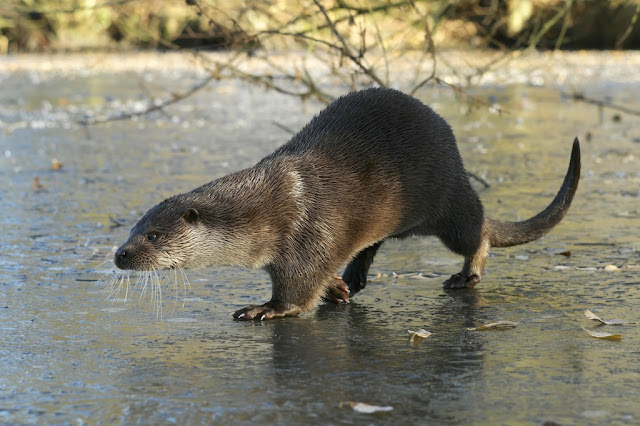 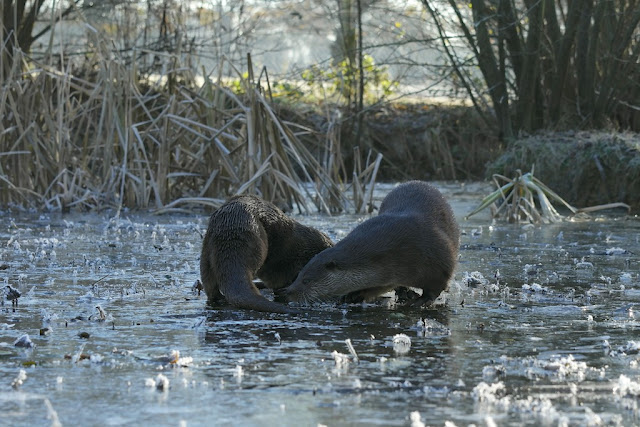 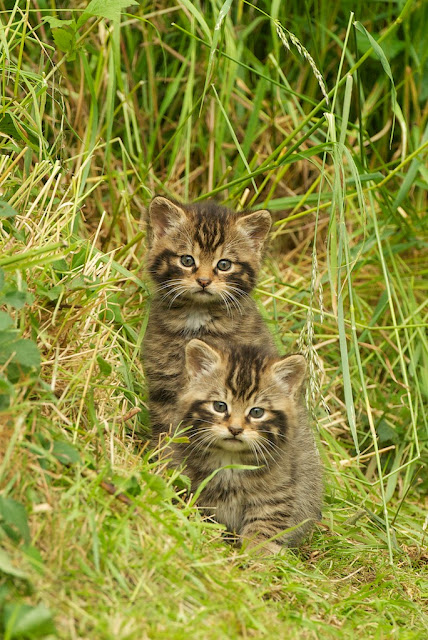 Wow, what a busy time of year for us. Usually after the summer opening has come and gone we can catch a breather, but booked groups and animal coming and goings have been on the up. All good of course and great that the Centre is doing so well.

So well in fact that our owner, and Centre founder David Mills has been recognised for his hard work and was awarded an MBE for services to wildlife conservation... Congratulations David!

So, we are probably due a bit of a catch up here... You of course remember our wildcat kittens?! Macavity and Kendra had three lovely kittens earlier this year. Unfortunately the slightly runty one didn't make it, but the other two are a picture of health. Both are females and have been named "Morag" and "Merida" They will eventually move on to other collections to aid in the wildcat conservation breeding program that we are part of, with hopes of releases as soon as 2019! 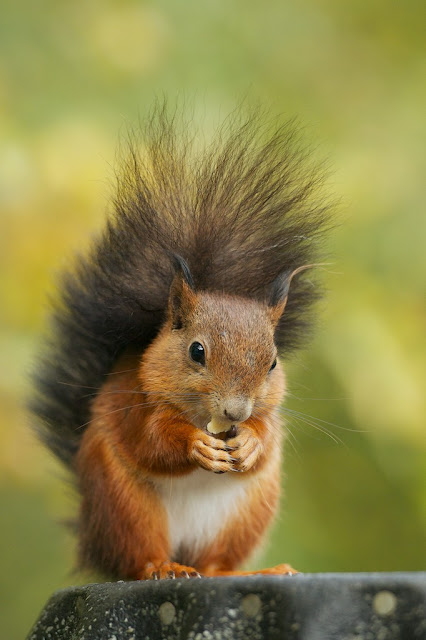 Our red squirrels have had a real bumper year, and we have gained some new lines/genetics with swapping of livestock with other groups around the country. I mentioned earlier in the year another island release which David has been planning... It is still going ahead, and the squirrels we sent over there earlier this year are doing well, but our second lot of squirrels that where going to head over this autumn we have decided to delay.

With the weather looking quite harsh for the winter, we have decided to keep the youngster here where they are safe, and send them over in the spring when things warm up and settle down. Hopefully this will give them a much better start. Much more news on this as and when it happens next year. 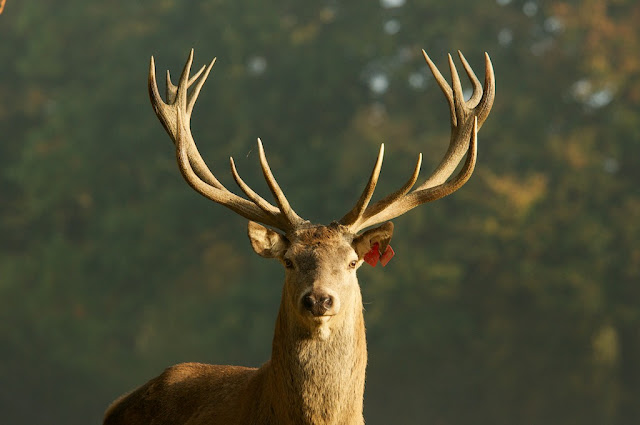 The deer rut is over for both the red and fallow. Lots of posturing and dominant calling, but not a lot of actual rutting this year. But probably unsurprisingly Albus Dumbledeer, above, remains the master stag. He better watch out for Olivander next year though as he will be much more of a contender then.

Some new arrivals to the Centre too, which I will announce over the coming weeks. Next up of course though will be Novembers photo of the month. 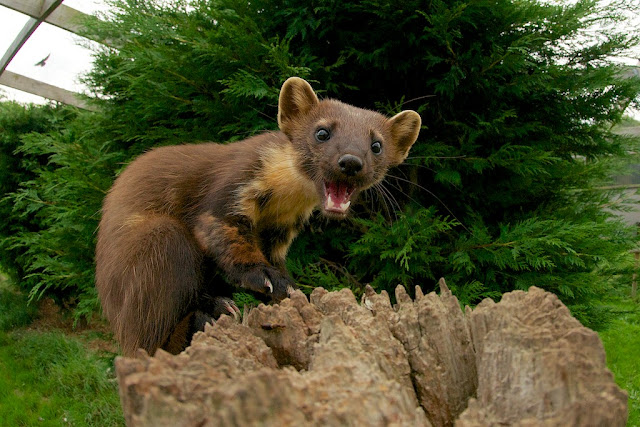 Oh, and what's that I hear you cry... "We haven't seen a pine marten photo for what feels like aaaaages Matt?"... Oh OK then, here you go.

Keep your eye out for our new arrivals over the next couple of weeks.
Posted by Matt Binstead at 11:56 1 comment: