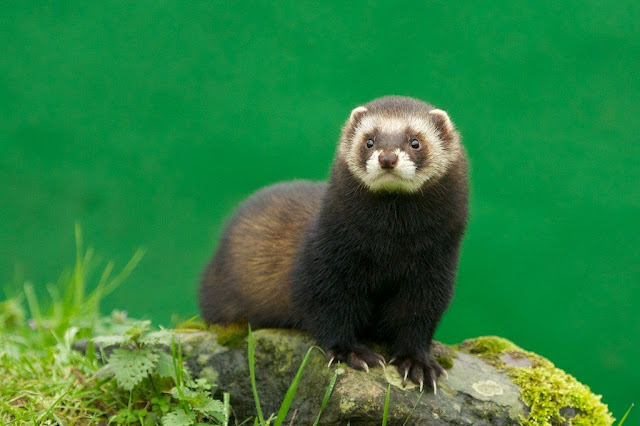 You may have heard rumors that we have a new polecat?.. Well, yes we do... but not this one above. Above is Whitstable who has been with us for a while now, and successfully sired many kittens which have gone on to be released.

So why a picture of him? Firstly, our new female polecat is being very shy at the moment, and I have yet to take a photo of her. Secondly, I thought you may like to see some videos from the post monitoring cameras of the polecat release last year.

Whitstable sired these kittens, see... there was a link there to the photo above... His kits from lat year, along with others in the breeding group, were collected and released by 'Ferret Rescue Surrey'. They do a great job, along with the studbook holder, in organising and collecting the polecats. And along with their band of volunteers have successfully soft-released many polecats over the years.

These camera traps are just part of the post release monitoring they do, and have been successful recently in capturing some lovely clips of these polecats out in the wild.

Most activity has bee seen at night, unsurprisingly, but even a little bit of daylight action has been seen.

So, hope you enjoy these, and I will introduce you to our new female polecat as soon as I (or any one else visiting) manages to get a photograph of her. She will be paired up with our other male, Billy, in the hopes of them mating later this year. We have yet to name her, but some names in the air include Crystal, Piper, Ocean, Jean... see where the keepers are going with this! Or maybe even Cassandra... yeah, thanks Tom!

Of course I am very disappointed, as none of these are 'Game of Thrones' related.
Posted by Matt Binstead at 09:02