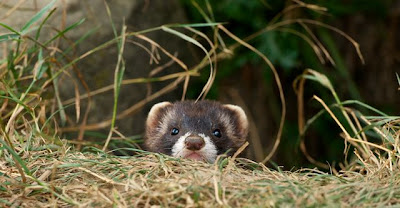 The polecat is one of our most popular animals with the visitors we have, I think this is due to their very playful nature, curiosity and perhaps familiarity too as they do very closely resemble the domestic ferret. But it hasn't always been perceived in this way in the wild.

They once had a very bad reputation for being blood thirsty animals and were considered vermin, with the term "foulmart" often used as a derogatory name for someone. Because of this gamekeepers would intentionally trap and/or kill them, and along with other reasons such as road deaths, interbreeding with domestic ferrets and habitat loss, this led to the polecat becoming extinct in England with only a few individuals remaining in Wales.

During the late 20th Century the polecat started to increase again in number and distribution. They are now partially protected under the Wildlife and Countryside Act, an increase in rabbits after the initial myxomatosis outbreak has helped with prey source and deliberate re-introductions have really boosted their wild numbers. 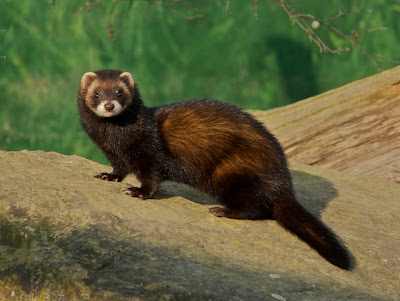 The BWC is part of an independent studbook and breeding program for the polecat, along with many other centres, and have successfully bred them here for many years now with many of the kits being introduced to the wild.

Once again this year, Storm and Velvet produced a lovely litter of 7 kits... all of which were females! A couple of these have been held back for future breeding pairs and gone of to new homes at other centres, but the remaining ones are being collected later this week to begin their acclimatization for a release later down the line.

To find out more about polecats, be sure to visit us over the Christmas opening period where you can see a daily keeper talk on the polecat at 1:00pm
Posted by Matt Binstead at 09:22