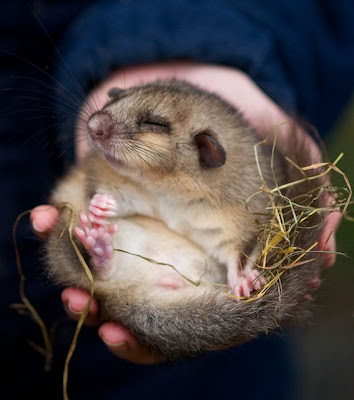 So, with all this talk about the common dormouse, what about it's cousin... the "Edible Dormouse"

The edible dormouse, often referred to as the "Glis" after its latin name, Glis glis. Is an introduced species to Great Britain. It was first introduced to this country in 1902 by a Lord Walter Rothschild, to Tring Park in Hertfordshire. From there they have spread and increased in number...

By the 1920's it was known that they were damaging local crops and coppice land, but despite attempts to control them they continued to spread.

By the mid 1930's they were beginning to become a domestic problem, moving in to peoples loft spaces and gnawing through roof beams and electrical wires.

Today they are still generally confined to the Chilterns region, and populations estimates at best, show there are quite possibly more than 10,000 of them in the area.


The edible dormouse gets its name from them being an old, popular dish on menus throughout Southern Europe. It is certainly true that the Romans used to rear them for the sole purpose of eating, although this was very unlikely to have happened in this country.

The Romans used to keep many of them at a time in large earthenware pots called "dolia" where they would feed them up. Once fattened, they would pour cold water over the dolia to cool them and place the dormice inside into their hibernating state. This way they could keep their food supply fresh, without having to feed them any more, and so simply pick one out whenever they fancied one.


Edible dormice are very different to common dormice in both looks and behaviour. Looks wise, they are a large dormouse, grey in colour as opposed to the smaller golden colour of the common dormouse.

Behaviour wise, unlike the calm natured common dormouse that very rarely bites. The edible dormouse can be a very scatty, vocal and aggressive animal.

The status of Edible dormice in Britain is a strange one. All dormice are protected in Europe, and so their trapping and removal is only allowed under licence from Natural England. They are an alien species that are only in this country due to mans interference, and so therefore it is illegal to re-introduce them back in to the wild. So, once they have been trapped what happens to them?.. I think you can probably guess, but it seems strange that this can happen to a fully protected European species.
Posted by Matt Binstead at 08:38