New arrivals at the BWC 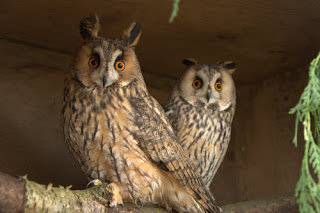 Today the BWC welcomed new arrivals to the Centre. It is always exciting to receive new animals, even more so when it is a species that we have not kept before.

Above is a photo of our two new Long-Eared Owls. We have named them "Quil" and "Embry" Long-eared owls are native to the UK but not very common in captivity. Currently there is only one well-known breeder of these owls in the country, but we have acquired a potential breeding pair in the hope that we may be able to breed some of these amazing owls ourselves.

We are also awaiting the arrival of a long-eared owl chick, still yet to hatch, which I will then train to fly to be part of our flying team. This should prove to be a great display as we will be one of the only places you could go to see these owls in flight. 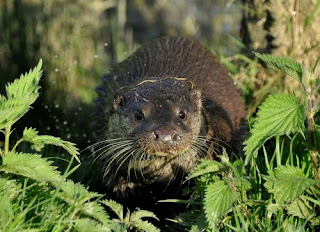 Our other new arrival was a young male Otter called "Kernow" He came from the Tamar Otter Sanctuary in Cornwall where we traded him for our young male cub. He was introduced to Lilly, pictured above, this afternoon.

They both seemed very excited to have company and met with chattering noises and started playing straight away. We hope they will form a close bond and maybe even produce cubs when Kernow is mature in a couple of years time.

The name "Kernow" is old cornish for Cornwall, and regular members and photographers may be pleased to know that he is the son of Carmen, the female otter we had on breeding loan for 6 months about 2 years ago.
Posted by Matt Binstead at 19:36