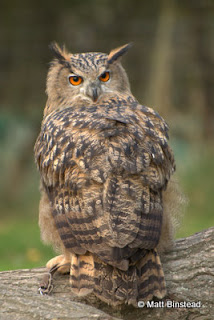 The European Eagle Owl is the largest owl in the world, and is found living in the UK. Until as recently as the late 19th Century they were considered native, until they became extinct from our isles mainly due to persecution by man.

Recently numbers have been returning, some believe as migrants from European countries, but more likely as accidental and/or deliberate releases from captivity. Until only a few years ago there were considered to only be a few breeding pairs, but after a population survey in the north of England where they rung several chicks, there are now believed to be quite a few more out there and the World Owl Trust is calling for them to be re-instated as a native species once again.

Weighing anything from 4Ilbs8oz up to around 8Ilbs and combined with a large wingspan of up to 6ft they are the dominant bird of prey in this country. They prey on most small mammals and have been known to take anything up to the size of a roe deer plus other raptors such as buzzards from their night roosts. More commonly though they will feed upon rabbit. 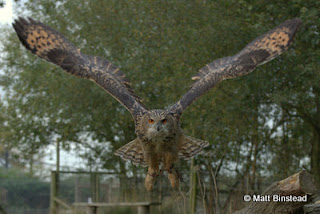 Here at the BWC we have three European eagle owls. Igor and Doina are in our display aviary, and Ethel who is part of our flying team. The owl display is a new venture for us and is so far proving extremely popular. At 4.00pm in the Dell we have our 'Owl Display' were Ethel takes part in flying around the dell, near and next to the onlookers. 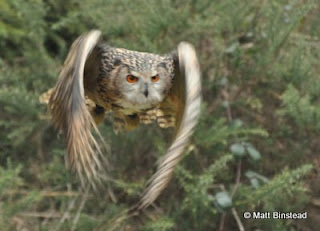 It provides a great opportunity to see this amazing animal in flight, as well as a chance to get some photos and video footage at close quarters.


The video above was taken by regular visitor and photographer to the Centre, Andy Critchfield. It shows how awesome Ethel is in flight but also how elegant she is too. It is only when you see the full extent of her wingspan you appreciate how big an owl she really is!

Be sure to hang around for the owl display next time you are here!
Posted by Matt Binstead at 22:11