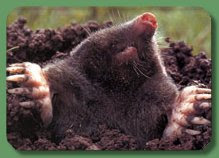 To me, surprisingly, the Mole is one of our most popular exhibits... so it was a great shame when our last resident mole unfortunately passed away. She had done extremely well, being captive for nearly 2 years, and shows we have finally cracked the way to display these amazing creatures.

Well, many of you will be pleased to know we now have another mole on display. He has settled in extremely well and is now often seen making his runs through the enclosure, or out eating his food.

Moles are usually a subterranean mammal and usually only  evident by the large mole hills they leave behind, but the mole itself is usually only around 100grams. It has very small eyes which it hardly needs, but large shovel like front paws and claws which it uses to excavate its underground network.

Moles can travel these tunnel systems frontwards or backwards thanks to their fur which can lay in either direction, and the mole can even do a roly-poly in the tunnel to turn around if it needs too.

Moles are generally active for just a couple of hours, then rests for a few hours, then active again... and this happens all day and all night. They spend their time looking for their diet, of mainly earth worms, that have fallen into their home, while also expanding and cleaning their network and at the right time of year looking for a potential mate.

The mole is often seen as a pest for the destruction this little animal can bring to gardens, but they are also a very important animal which plays a large role in our native ecology.
Posted by Matt Binstead at 08:45