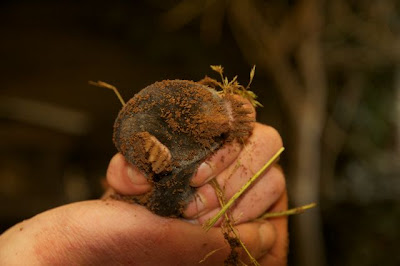 Our new mole came to us as a film star, and is set to make his debut appearance on TV tonight.!

At 9pm on BBC2, a new three part series starts all about the life of animals underground. It looks to be really interesting, and promises to show unique footage of rabbits, badgers and moles and how they spend their time underground.

A lot of this was filmed at the West Country Photograph Centre, where purpose built warrens, dens and setts were built for the cast to live in over the course of a year. We have close links with the WCPC, and have donated animals to them in the past and vice versa... including our newest arrival, the mole!

Our new mole has settled extremely well in our hedgerow display, and was one of the moles used for filming for this new series. If you have the time, why not check out the program tonight.
Posted by Matt Binstead at 16:18