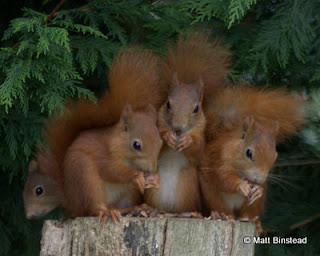 Earlier today I had to make the horrible decision to put one of our elderly Red Squirrels, Auburn, to sleep. She is pictured above on the right, with three of her kittens from 2008.

She was at the grand old age of 9 and had been slowly deteriorating for a few weeks... I was hoping to let her retire out in the main pen, her home, but unfortunately found her this morning on the floor of the enclosure unable to move her back legs. It was no longer fair on her to let her carry on so I took her to the vet this afternoon to let her pass away quickly and peacefully.

Auburn was my favourite squirrel at the Centre, and I had worked with her for 5 years. She was the first of many Red Squirrels I collected for the BWC. She arrived as a potential breeding female, and did not disappoint. Over her 5 years here she has produced many litters of kittens, including a litter she abandoned which I went on to hand rear, but the majority she looked after extremely well and now many of them are living in the Copse.

Auburn was always very active and climbed the enclosure wire often to greet people. During the talks she would climb all over me and also stared in many a tv programme. She will be sadly missed, but always remembered.
Posted by Matt Binstead at 23:48