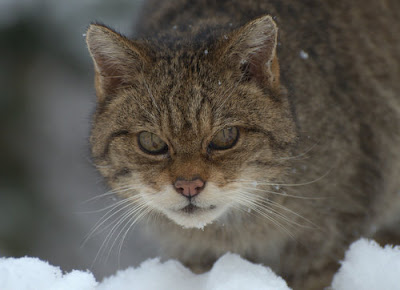 Sadly, the week before Christmas we said good bye to our eldest and one of our first wildcats at the British Wildlife Centre.

Una was one of the very first wildcats that came to the BWC, back in 1996. She arrived with her siblings and mother and quickly became one of our most well known animals. While here she went on to have many litters of kittens herself and provided much joy to many people getting up close to this rare and special animal.

Over the past few years, in the lead up to winter, Una had lost a bit of condition and was struggling to look after herself, but with careful looking after always bounced back for the Summer season. This winter however, she took a turn for the worse, and shortly before Christmas it was clear that she wasn't going to make it this time and it was kinder for her to allow her to pass away peacefully at the grand old age of 17.

Una will always be remembered as arguably the most photographed wildcat in the world! Almost all of the photos I see of a snarling wildcat is of Una, who always posed nicely and snarled on command for photographers, and is immortalised in many popular books on animals and has on numerous occasions been in top magazines such as BBC Wildlife!