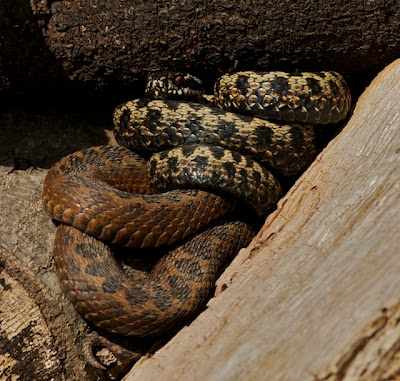 The weekend saw the first signs of our female adders emerging from brumation, this of course stirred our males back into action and we saw a bit more "dancing" in between the wet periods of both Saturday and Sunday.

With the females now out, I can show you the difference between them and the males. There has been a lot of confusion in who is who this year, and I think it doesn't help that we have one male that looks very different to our other two, but hopefully this will clear things up a bit... 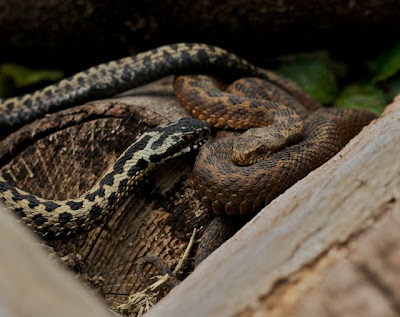 As you can see from the two photos above... we have two very different looking adders. Now this is only a generalised rule, but you need to look at the contrast in colours on the snake as well as the colour itself. You tend to find that the male adders have far more contrast between their zig-zag marking and their base colour than the females do.

Male adders are normally a silver/grey or sandy colour with vivid jet black markings. The females are more of a browny/copper colour with duller brown markings.

It doesn't help when our males are shedding, as they go very dull and almost female like in looks... Also one of our males is grey while the other two are sandy. But from the pictures above I think you can see a clear difference. 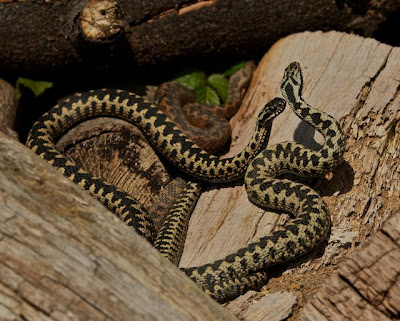 Having one of our females out spiced thing up once again, and two of our adders were competing to lay with her. 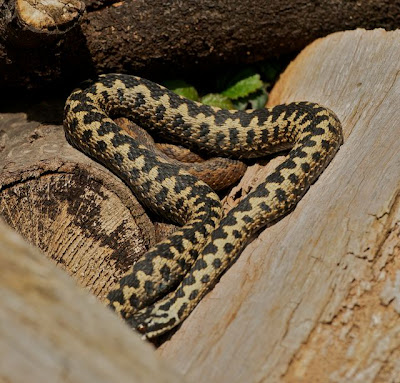 One gave up very quickly though, and un-surprisingly our larger male settled nicely with the female, and if you look closely enough you can even see he creates a heart shape over her body... ahh... or is that just me?

More news later in the week about Ellis, and exciting news on a research project we are collaborating on.
Posted by Matt Binstead at 17:58