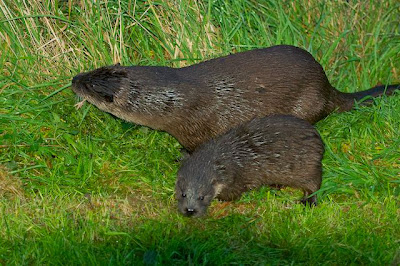 Two months ago, Emmy gave birth to an otter cub. I said back then that he would probably start coming out towards the end of the Autumn half term, and that seems to be the case.

Yesterday he was seen by a few members of the public starting to swim. Of course we all ran down excitedly to see what he was up too, and managed to get a glimpse of him in the distance.

Today he has been on top form, and has been out for much of the day... he even made an appearance for the afternoon keeper talk, joining mum and dad on the bank for some food! I can't believe he is so settled already in front of people. 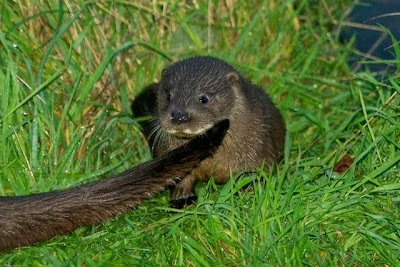 I sexed him a couple of weeks ago, and we named him "Franklin". He is the only cub of the litter, not unusual since it is Emmy's first time as a mum, and seems to be doing extremely well. He really is a chubby little thing...

I tried to get a few photos for you afterwork today, but completely forgot it gets dark so soon now. So these are not the best after sunset, but hopefully will tie you over till I can get something a bit better. Also keep an eye out on our Flickr group, I am sure a few of our members managed to get some much better photos of him today! 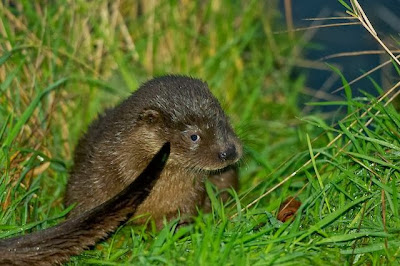 Otters can give birth anytime of year, so this is by no means a late litter. Little Franklin will stay with mum and dad in to next year, before we start to think about separating him out and introducing him to our spare otter pen. 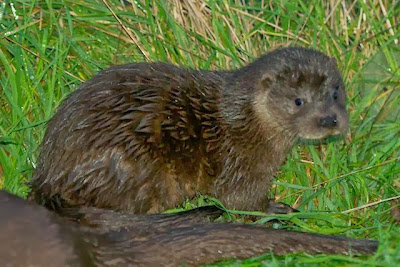 Of course there are no guarantees, but if you want to try and see Franklin... this weekend is your last chance before we shut for weekends. Come Christmas week he will be quite a bit bigger! If he follows on anything like he has been today and yesterday, then I expect him to be out quite a bit these next few days.